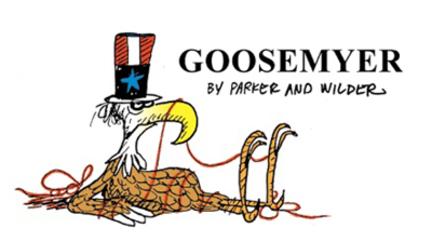 The main character, "Fenton B. Goosemyer", is a government clerk hopelessly caught in the bureaucratic red tape of Washington DC.  Parker once said the strip was a way of commenting on man's folly trapped in the system.  During its syndication in the 1980’s, Parker and Wilder received fan mail from Washington "insiders" and "outsiders" alike.

Goosemyer was a syndicated cartoon strip created by Brant Parker in 1980.  Drawn by Parker and written by Don Wilder, the strip became a favorite with people from all walks of life.

A flashback of Washington DC at it's best... and worst

Recurring themes of office politics, red-tape, taxes and empathy for the "man in the middle" trying to do his best on the job make this classic strip as relevant today as it was in the 1980's.  Along with his fellow government employees, Goosemyer is joined by his cynical dog “Cudlow”, his politically diverse neighbors, flamboyant politicians and international spies.​ 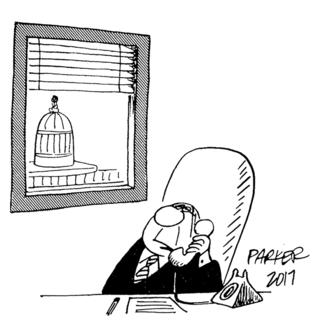