"Some people ask us what it's like to work together as husband and wife. A sense of humor keeps us sane.  Just when we're on the brink of divorce something funny happens and we automatically start to draw.  It's all about seeing the humor in life." -- Nicola & Jeff Parker

We had the privilege of working with Jeff's father, Brant Parker, and his long-time cartoon partner Johnny Hart, eventually co-writing and drawing The Wizard of Id for over 20 years. 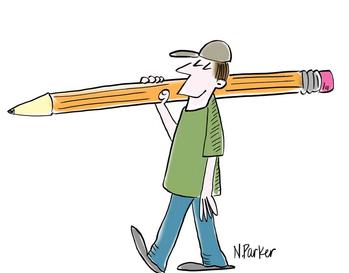 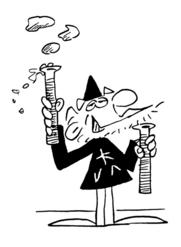 We are a husband and wife team creating humor books, coloring books, greeting cards and cartoons for over 25 years.  Among other things, we co-wrote and illustrated the "Wizard of Id" cartoon strip from 1998 to 2017. 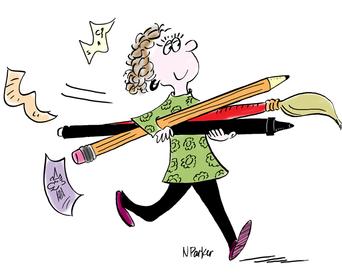 Nicola is an artist, illustrator and digital media  maven.  She met Jeff in 1991 and soon joined "The Wizard of Id" team working as an illustrator, contributing writer and computer graphic designer.

Jeff's training began at a young age watching his father, Brant Parker, draw cartoons for "The Wizard of Id", "Goosemyer" and "Crock."  His official apprenticeship began when he joined his Dad in the studio in 1986.

Life with the Wizard

​​It was a great loss when both Brant and Johnny, our cartoon mentors, passed away within a week of one another in 2007.  Their humor and talent was an inspiration to us as we continued the strip and began our collaboration with John Hart's grandsons, Mickey and Mason Mastroianni who took over production of the strip in 2017.